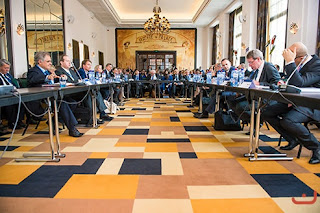 7 June 2017. Brussels. European Development Days (EDD). Invited CEOs and high-level stakeholders engaged in lively debate as part of a series of 3 thematic sessions (Agri-Business, Digitalisation and the Green Economy). The sessions and their organisers from the private sector have been selected from 25 proposals.

Vimal Shah, CEO of Bidco Oil Refineries Limited and BIDCO Group. BIDCO Group is a business conglomerate involved in the manufacture of edible oil, detergents, soaps, margarine and baking powder. He is also a member of the 3GF (Global Green Growth Fund) Advisory Board and the Tony Elumelu Foundation Advisory Board.

French businessman Pierre Gattaz was elected president of MEDEF, the Movement of the Enterprises of France in July 2013. At the same time, he became first statutory vice-president of the Comité France Chine, an organisation which aims to promote knowledge and understanding between French and Chinese companies and China’s government.


"European SMEs should invest in Africa"

Rebecca Stromeyer is director of ICWE, an international events and communications company. She is also co-founder and co-owner of ICEF, the global leader in international student recruitment and travel for education workshops.

Extract of the thematic sessions:
Innovative agriculture for next generation farms: Sparking youth interest in technology-driven agriculture and achieving food security
This session stimulated a discussion about the importance of bringing EU and pan-African agriculture into the third millennium. It addressed how “farming 2.0” innovation can improve food security and boost youth employment in a sector that has recently faced skills shortages. It looked at how technology-driven farming can play a key role in agricultural development over the coming decades to ensure that we can feed the world, given that by 2050 the global population will surpass 9.5 billion and will require 50% to 70% more agricultural output to ensure security of food supply for everyone.

The session highlighted the success of innovative African agricultural start-ups to explore how achievements in sustainable African farming can be leveraged to improve agricultural practices throughout the African continent. The session called on EU Member States and African countries to promote policies that support the development of agricultural technology, improve sustainability, and encourage the involvement of young farmers.

Moderator:
Lanre Akinola is the Editor of African Business, IC Publications. He is the former Editor of the Financial Times’ flagship Africa publication, This Is Africa, and has worked with the Bloomberg Media Initiative Africa. He is a board member of the Business Council for Africa and a 2014 Desmond Tutu Leadership Fellow.

Josephine Okot, Founder and MD Victoria Seeds Ltd. Josephine Okot has steered Victoria Seeds from a struggling start up to Uganda’s leading seed house, which was ranked #2 in the 2016 Access to Seed Index. The company that she founded was established in 2004 to disseminate quality seed to smallholder farmers, with the aim of improving crop yields and nutrition. It is the proud winner of the Uganda Responsible Investment Award, Best Seed. In 2014 she was Uganda Business Woman of the Year.

Maira Dzelzkalēja, VP Latvian Farmers Parliament. Maira Dzelzkalēja is an expert in agriculture with over 20 years experience. She is vice-president of the ‘Latvian Farmers Parliament’ union, where she is responsible for agriculture and rural development strategy, as well as international relations. She has been vice president of the Committee of Agricultural Organisations (Copa) since 2013, and chaired the Copa-Cogeca working group on agriculture and rural development.

Michael Hailu, Director, Technical Centre for Agricultural and Rural Cooperation. Originally from Ethiopia, Michael Hailu is the director of the Technical Centre for Agricultural and Rural Cooperation (CTA) based in the Netherlands. CTA is a joint institution of the African, Caribbean and Pacific Group of States and the European Union working under the Cotonou Partnership Agreement. As CTA director, he identified three priorities for the centre’s work: enhancing inclusive value chains, strengthening capacities of agricultural research institutions, and building networks in knowledge management and ICTs.

Dr Kanayo F Nwanze. From 2009 until 2017, Dr Kanayo Nwanze was the fifth president of the International Fund for Agricultural Development (IFAD), an organisation that puts agriculture, and especially smallholder development and rural poor, at the heart of the international development agenda. He has also served as the director-general of the Africa Rice Centre’s Consultative Group on International Agricultural Research (CGIAR) where he was instrumental in introducing high-yield, drought- and pest-resistant Nerica rice varieties, developed specifically for Africa.

Related:
1 July 2017. Rome. High-level roundtable on Inclusive Agri-Business.
Agriculture continues to occupy a key role for poverty alleviation – and it is increasingly clear that private investment will be essential in the promotion of sustainable agricultural growth in developing countries. Nevertheless, private investments in agriculture continue to face many obstacles, and such investments are generally seen as high-risk. Only a marginal share of equity investments in the developing world is in the agriculture sector. The Commission is organising a high-level roundtable on agri-business, bringing together key players from the private and public sector, as well as civil society. The event seeks to address the main obstacles to agricultural investment, and improve the risk situation faced by investors. It aims to hear the voices of those directly engaged in agricultural investments, and gather their suggestions and ideas to de-risk investments in agri food chains.

The event will look at the business environment and innovative financing mechanisms available to investors (such as the European External Investment Plan proposed by the Commission), and identify where the public sector needs to intervene for a more favourable business environment. The event will also convey messages for the AU-EU agriculture ministerial meeting, which is being held the following day.
at Monday, June 19, 2017