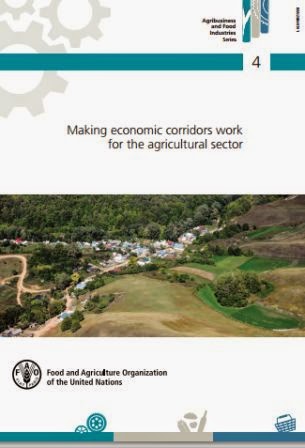 11 March 2015: FAO has published a report (218 pages)  providing guidance on how economic 'agrocorridors' can draw private capital and large-scale investment to projects that benefit smallholder farmers and increase food security in lower-income countries.

The report, titled ‘Making economic corridors work for the agricultural sector,' contends that such corridors encourage economic sectors, especially agriculture in developing countries, in territories connected by highways, railroads, ports or canals, through the integration of investments, policy frameworks and local institutions. It explains that the potential of these corridors as “engines of broad-based sustainable development” has remained largely untapped, and can be harnessed to achieve smarter planning.

The report details six case studies, including three advanced corridor programmes in Central Asia, the Greater Mekong Subregion in Southeast Asia and Peru, as well as three new projects in Indonesia, Mozambique and Tanzania. It describes how corridors can act as a tool favoring natural resource governance, allowing for better management of environmental risks and practices, such as unsustainable monocropping. To stimulate better governance, corridors depend on coordinated public-private partnerships to link local and central governments.
at Tuesday, March 17, 2015