INNOVATION INTERMEDIARIES IN AN EVOLVING SMALLHOLDER AGRICULTURAL SYSTEM IN KENYA 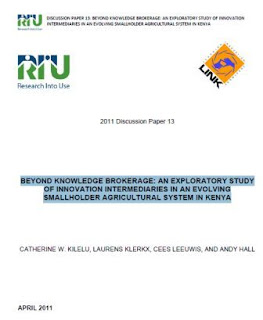 • Title: BEYOND KNOWLEDGE BROKERAGE: AN EXPLORATORY STUDY OF INNOVATION INTERMEDIARIES IN AN EVOLVING SMALLHOLDER AGRICULTURAL SYSTEM IN KENYA

This document resulted in part from research supported by the Research into Use (RIU) programme, funded by the UK’s Department for International Development (DFID) for the benefit of developing countries.

The recognition that innovation occurs in networks of heterogeneous actors and requires broad systemic support beyond knowledge brokering has resulted in a changing landscape of the intermediary domain in an increasingly market‐driven agricultural sector in developing countries.

This paper presents findings of an explorative case study that looked at 22 organisations identified as fulfilling an intermediary role in the Kenyan agricultural sector.


The results indicate that innovation brokering is a pervasive task in supporting innovation and will require policy support to embed it in innovation support arrangements. The paper is not normative about these arrangements.
at Wednesday, June 01, 2011