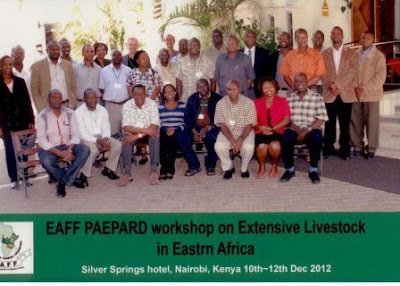 EAFF together with its consortium partners in the PAEPARD program is organizing a continental multi stakeholder research question development workshop around the federating theme “Extensive livestock value chain” to:
The participants for this workshop include PAEPARD partners, national, regional stakeholders working in Farmer organizations, private sector, government, consumer organizations, research institutions, Universities, and farmers all interested in the extensive livestock value chain within eastern Africa region.

Participants came from Kenya, Tanzania, Uganda, Burundi, Zambia, France and the UK and represented research, education, farmers organizations, non-government organizations, national governments, agricultural extension and advisory services, the private sector and regional economic communities. The discussions were guided by a new Eastern Africa Livestock strategy commissioned by EAFF, and carried out by the Agency for Inter-regional Development, as an input to its strategic plan for 2012-2020.

In his opening remarks at the workshop Mr Philip Macharia Kiriro, President of EAFF, explained that a key pillar of the plan is “…trade and agribusiness with a special focus on value chain development and economic services to EAFF members…”. He indicated that EAFF’s livestock focus will be on the extensive beef value chain and that regional collaboration is need to ensure both productivity gains and improved market access.

One of the main tasks of workshop participants was to validate EAFF’s livestock strategy and to prioritize proposed areas for intervention at three stages along the value chain; namely, production, processing and marketing.

The group looking at production identified the need to improve the availability and quality of feed and water and to prevent and control pests and diseases as the two most important research issues. Improving food safety and quality standards and developing and promoting value addition technologies emerged as the key research issues for processing.

Finally, enhancing product standards and policies for improved market access and improving access to, and utilization of, market information were the priorities for research related to marketing. A core group of seven persons has been given the responsibility to draft a concept note and to identify additional organizations which might contribute to a new research initiative. Potential opportunities for funding have been identified and further work is being done to promote the initiative and secure additional support. 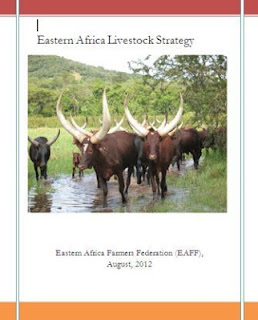 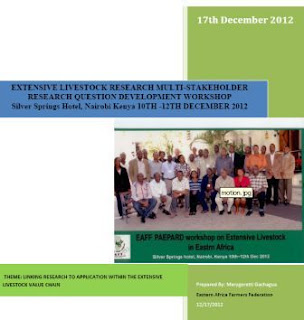 The report of the meeting in English can be downloaded here

The report of the meeting in French can be downloaded here

Background:
PAEPARD partners shifted to a new user led brokerage procedure which is giving the lead to the “research users” partners (especially FOs but also the private sector) in the organization of brokerage activities in particular the organization of “brokerage workshops” around a federating theme that they have themselves chosen.

With this in mind EAFF through collaborative approaches and consultation within Eastern Africa stakeholders identified a federating theme to focus on Extensive livestock value chains. In May 2012, the Eastern Africa Farmers Federation (EAFF) contracted the Agency for Inter-regional Development (AFID) to carry out a consultancy study to develop a Livestock Strategy for Eastern Africa. The focus of the strategy was given as “Extensive Livestock Systems” predominant in the dry areas of Eastern Africa. Major species involved were cattle, small ruminants (sheep and goat) and camels. Poultry and pig rearing in the target production systems which involve agro-pastoral and pastoral systems were also to be captured. The objective of this approach is to

He responds to following questions: