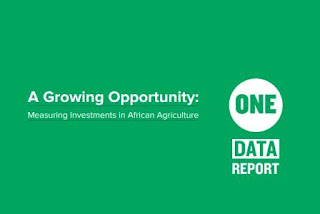 March 27, 2013. A new report from the ONE Campaign shows that Africa is making gains in farming and food security, but can only achieve its goals if the developed world delivers promised funds. African countries are making promising agricultural gains, but the progress remains in the balance due to a $4.4 billion funding shortfall. That is in addition to $11 billion in agriculture funding pledged by G8 nations that has yet to be disbursed.

The ONE report cites 2013 as an important year for agriculture in Africa because it is a time when international and domestic funding agreements come to an end.

“African leaders have the opportunity to deliver on their goals of lifting millions from extreme poverty and hunger and preventing chronic malnutrition by meeting these commitments,” write the report’s authors.

Edward Carr of the University of South Carolina was general supportive of the report, but noted that the problem of agriculture may be one that is about markets rather than production.
“There is no discussion on the massive rate of loss between farm gate and market in this region,” Mr. Carr says. “The report raises further questions. Is there really a production shortfall or a marketable crop shortfall?”

Duke University researcher Marc Bellemare pointed out that trade is missing from the report. He says that development gains will be made through policy changes as opposed to simply increasing aid.
“For 60 years, we have been telling developing countries to open themselves up to international trade, that trade is not a zero-sum game. But international trade only helps a country if it can tap into its comparative advantage, which for developing countries is agriculture,” says Mr. Bellemare. “We are undermining the comparative advantage and constraining the economic development of the developing world by refusing to liberalize agricultural trade and heavily subsidizing our own agriculture,” he adds.
at Friday, March 29, 2013