The discussed themes were:

Objective
The objective of this roundtable was to bring together key (AU and EU) stakeholders to discuss issues that are central to sustainable agricultural development and their implications for the CAADP process: land, research, seeds, family and women farming. The timing is right as several key policy processes are currently under review, both at European Union (EU) and African Union (AU) level. Furthermore agriculture will be high on the international agenda in 2014 as it will be the AU Year of Agriculture and Food Security the UN General Assembly has declared it the Year of Family Farming.

The results of this roundtable will hopefully inform the 2014 review of the CAADP framework, currently underway under the leadership of the AU.

A keynote speaker under the third theme was: Roger Leakey, previously with CGIAR, author of “Living with the Trees of Life” 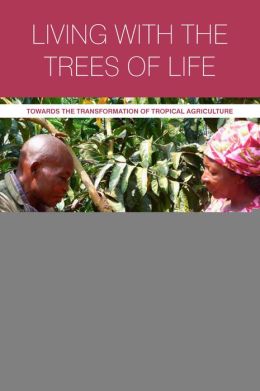 Living with the Trees of LifeTowards the Transformation of Tropical Agriculture
By R Leakey, Professor of Agroforestry and Novel Crops Unit, James Cook University, Australia

In his book, Dr. Leakey explores a particularly promising innovation—agroforestry. Agroforestry consists of a wide range of practices that integrate trees in farming systems.

In Living with the Trees of Life, Dr. Leakey suggests that farmers in tropical areas of Africa, Latin America, Asia, and Oceania domesticate indigenous trees as cash crops to foster both increased biodiversity and economic opportunities. With increased diversification, agroecosystems will provide habitats for wildlife, improve soil erosion, protect watersheds, and reduce emissions of carbon dioxide, helping to mitigate climate change. The only obstacle in implementing these agricultural innovations, Leakey argues, is a lack of political will and appropriate policies.

Read more about Living with the Trees of Life here. Posts about Dr. Leakey’s work: An Evergreen Revolution: Using Trees to Nourish the Planet, Trees as Crops in Africa, Where Would You Like to See More Agricultural Funding Directed?

He was born in Kenya and educated at Marlborough College in England before becoming an agriculturalist (NDA and CDA from Seale Hayne Agricultural College (1964-67 including 18 months practical farm work in England, Sweden and Scotland); B.Sc. Hons. in Agricultural Botany (University of Wales 1967-1970), Ph.D. in the physiology of perennial weeds while working at the ARC Weed Research Organization (University of Reading 1970-1974).

Between 2006 and 2008, he was a Coordinating Lead Author in the International Assessment of Agricultural Science and Technology for Development (IAASTD). This Assessment examined the impact of agricultural knowledge, science and technology on environmentally, socially and economically sustainable development worldwide over the last 50 years. To meet the challenges agriculture is facing it has to become more multidisciplinary and embrace food production within a more integrated approach in order to achieving environmental, social and economic goals.
at Saturday, November 30, 2013