Co-organized and hosted by the Future Agricultures Consortium in partnership with the Journal of Peasant Studies and the Land Deal Politics Initiative (LDPI). This international academic conference on ‘Global Land Grabbing’ will be held on 6-8 April 2011 at the Institute of Development Studies (IDS), University of Sussex, Brighton, UK.
The focus of the conference will be on the politics of global land grabbing and agrarian change. Papers are expected to address some of the most urgent and strategic questions around global land grab. Some suggested topics are below:
at Friday, February 25, 2011 No comments:

Building true partnership between Science and Society: Lessons from DURAS

The DURAS Programme has pioneered new ways of integrating innovation from science with that from communities themselves.

At the heart of DURAS has been its innovative competitive grants system, which followed an original selection and evaluation process that placed a premium on multi-stakeholder partnerships. The principles developed through DURAS ensured that research priorities were identified in a participatory fashion and that less vocal stakeholders, most notably civil society groups, were mobilized to participate meaningfully in agricultural research for development (AR4D) processes. Alongside research practice, the programme also promoted the wider sharing and exchange of agricultural knowledge through interactive regional agricultural information systems.

Twelve projects were funded in Africa and Asia over a period of three years, each involving an array of disciplines and partners. These programmes allowed research institutions and civil society organizations to work as true partners, each bringing their own knowledge, understanding and ideas to the interface between science and society and breaking through institutionalized barriers, to bring new engagement and mutual understanding.

In tribute to the diversity and richness of partnerships involved in the 12 projects funded under its Competitive Grants component, the DURAS Project Coordination Unit has worked with Agropolis International to prepare a special issue of Dossier d’Agropolis, which is now available here in English (French version here)or by hard copy upon request to the GFAR Secretariat GFAR-Secretariat@fao.org.

Each article in this publication was written by the project participants. It is an attempt to capture, in a few pages, the complex, yet mutually enriching experience of partners across a wide range of development contexts. It also presents some key results and lessons learned along the way that will have value to many others working to create more integrated AR4D systems.

Innovative funding for innovative partnerships
at Friday, February 25, 2011 No comments:

Special report on feeding the world

The world's population will grow from almost 7 billion now to over 9 billion in 2050. John Parker asks if there will be enough food to go roundFeb 26th 2011
at Friday, February 25, 2011 No comments:

31 January-2February 2011. The International Livestock Research Institute (ILRI) hosted a workshop on gender and market oriented agriculture.
The Workshop Objectives were:
• To bring together researchers, practitioners, private sector and donors that have been working on efforts to promote market oriented agriculture in which gender is an integral component, to share lessons
• To synthesize lessons on what works in integrating gender and promoting women to participate in and benefit from agricultural markets
• To collate empirical evidence of the poverty, equity, food security and nutritional impacts of market-oriented agriculture
• To begin to build a new paradigm for market-oriented research and funding that serves the interests of women
Observations and reflections on the AgriGender 2011 Workshop


She identified five key lessons that we should follow: First, do a proper gender analysis with each project, activity, piece of research; second, you need to actually focus on women, “what specifically can we do to focus on the needs and concerns of the women”; third, support the capacities of local women’s organizations; fourth, improve women’s and girls’ access to education and training; and fifth, recognize and promote women’s innovation. This provides an entry point for joint participatory research and development activities that will take you where women want to go. She finally called for us to find effective ways to raise the profiles of innovative women who have made markets work for them and their families.
at Friday, February 25, 2011 No comments:

17th CABI Review Conference 15-16 February 2011
To coincide with CABI's 100 year anniversary, CABI held its 17th Review Conference in London. The event brought together environment and agriculture ministers from around the world and representatives from international development and major funding organizations. The event provided an opportunity for members to review the progress of CABI’s development and publishing initiatives, develop partnerships, and discuss ways in which CABI could work with member countries to address issues of concern in each region. 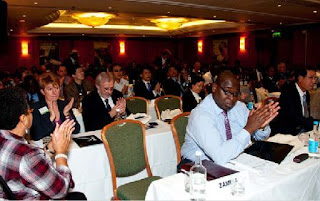 31 Jan –. 4 Feb 2011. Development partners, sub-regional organisations and other agencies with a stake in African agriculture met during the first week of February to discuss how best to mobilise development partner support for CAADP’s Pillar 4.
The objectives:
at Friday, February 25, 2011 No comments:

Date: 22nd to 24th June
Location: University of Leeds, United Kingdom
The Africa College, a research partnership between IITA, ICIPE and University of Leeds is holding an international conference to share lessons on translating research results into impact for food security, nutrition and human health.

The conference includes knowledge brokering sessions and workshops and is asking two questions:
at Friday, February 25, 2011 No comments:

February 10 - 12, 2011 Leveraging Agriculture for Improving Nutrition and Health: IFPRI 2020 conference at a glance

The Future of Food and Farming: Challenges and choices for global sustainability 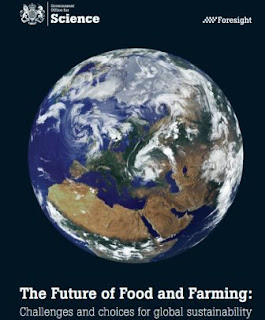 'The Future of Food and Farming: Challenges and choices for global sustainability' report was launched last week by the British government and written by its Foresight think tank, in consultation with researchers from 34 countries from across the developed and developing worlds.
The report provides a uniquely broad view of what causes food scarcity, identifying the factors that make up a complex political, social, economic and scientific web.
And it includes less obvious causes of hunger, such as the distressing fact that nearly a third of the food that is grown is wasted, for example by spoiling through poor storage.
It also conveys the sheer scale of the problem, demonstrating that food scarcity will eventually affect us all, even those of us whose bellies are full. Because, as we have seen in Tunisia and elsewhere, hunger leads to civil unrest and migration, and because farming, as it is currently practised, is destroying key resources and emits too much greenhouse gas.
Guilty by omission
In the sphere of research, many omissions have contributed to hunger. The report points out that existing innovations have not reached many of those who could benefit from them. In Africa, if these alone were implemented, productivity could rise as much as three-fold.
But three-fold, in only a few regions, is not enough.
New knowledge is essential. Yet for most countries, research into agriculture and fisheries is a low priority, says the report, and studies have now correlated the previous two-decade apathy with today's slowdown in productivity gains.
The report offers no support for 'knee-jerk' commentary seeking obvious scapegoats for hunger, such as the failure to adopt genetically modified crops, or the politics of food distribution. There is no single cause to rail against, and there is definitely no single solution.
And it makes clear that every approach must be harnessed in the quest for a new food system that "needs to change more radically in the coming decades than ever before, including during the Industrial and Green Revolutions".
Investing in research is one of the report's "key priorities". It points out that modellers agree that the science and technology yet to be done will be "one of the most critical drivers" of future food supply: "These challenges will require solutions at the limits of human ingenuity and at the forefront of scientific understanding," it says.
A priority for research
To achieve the required levels of research investment, says the report, more incentives must be provided for research into public goods that benefit low-income countries. New models of research funding are necessary. And research funders from the public, private and third sectors should sort out their differences and coordinate better.
The question is: can this report, and the others, propel hunger to the top of the political agenda? Calestous Juma, professor of international development at Harvard University, and author of a recent book on African food production [4], argues that the crucial step is getting heads of state to wantto solve the problem.
But achieving this degree of political will is hard, if only because hunger has the biggest impact on those who are in the weakest position to influence policy.
Reference: 28/01 SciDev Time to make agricultural research a top priority
at Tuesday, February 01, 2011 No comments:

Davos Debates 2011 and the New Vision for Agriculture initiative


http://www.weforum.org 24.01.2011
Hugh Grant, Chairman, President and CEO of Monsanto, looks forward to the launch of the New Vision for Agriculture initiative and addressing how businesses, community partners, NGOs and farmers can work together to supply enough food for the 200,000 new people who are born each day.


A New Vision for AgricultureThe New Vision for Agriculture initiative, led by the Consumer Industries Community of the World Economic Forum, works to develop a shared agenda for action and foster multi-stakeholder collaboration to achieve sustainable agricultural growth. The project works to advance market-based solutions to agricultural sustainability.


The New Vision for Agriculture initiative offers a platform through which stakeholders can create a shared agenda for action on sustainable agricultural development. It engages high-level leaders of industry, government, international institutions and civil society– with support from leading experts – to define joint priorities, recommendations and opportunities for collaboration.

A diverse network of global and local stakeholders are engaged in initiative dialogues and partnerships. The World Economic Forum manages the initiative, engaging a wide array of stakeholders in its dialogues, partnerships, and thought leadership activities. The Forum’s Global Agenda Council on Food Security, a high-level multi-stakeholder group, provides advisory and leadership support to the initiative. For more information on this project, please contactagriculture@weforum.org

21-30 January 2011. The International Green Week currently held in Berlin is not only the world’s largest consumer show for agriculture. The trade fair is also hosting an extensive conference comprising some 300 discussions, panels and workshops.

A panel was organised on the role of agriculture and agricultural trade for food security and economic development in West Africa. Stephen Muchiri (EAFF) was interviewed on coffee trade.