21 - 22 February 2014. Wageningen, the Netherlands. Over 800 people gathered to build the food movement in The Netherlands. The conference offered 42 workshops, 15 mini-lectures and excursions on a variety of themes, including local food networks, agroecology, seeds and biodiversity, fair agricultural and trade policies, healthy soils, urban farming, permaculture, food forests and land rights. In an important signal, the event took place at Wageningen University, known for its support for industrial agriculture.

Vandana Shiva was one of the keynote speakers at the two day conference in Wageningen She joined over 800 other thinkers and doers who are working to transform the food and agriculture system in The Netherlands and Belgium.

Other keynote speakers included UN Rapporteur Olivier de Schutter and various farmer leaders, as well academics from the Universities of Wageningen (NL) and Leuven (Belgium). ILEIA was one of the lead organisations in the preparation of the event.

The great diversity and active participation of farmers, students, activists, civil society representatives and other concerned citizens (over half of them young people) from all over Belgium and The Netherlands made the conference into a tremendous success.


One participant said: “I found new ideas, met old and new friends, exchanged experiences and made new connections. We’re all doing our work, but we’re not alone.” 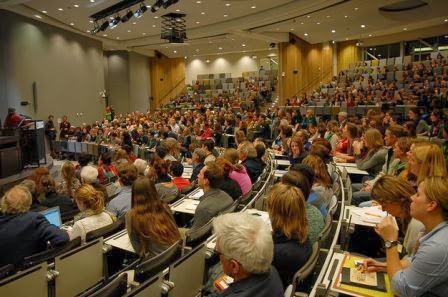 On a special wall at the conference venue, the outcomes of each workshop were collected, suggesting concrete steps to move forward and themes for further exploration.

During the conference, Vandana Shiva and Pablo Tittonell planted the first tree of a new food forest on university campus (see the video).

The conference aimed to help build the growing worldwide movement towards fair and sustainable agriculture systems, where farmers get a fair price and respect for their products and where we work with instead of against nature; a system in which food democracy rules, and not a handful of big corporations.

Watch the video recordings of the keynote speeches of:
During the 'Voedsel Anders Conferentie' in Wageningen in the Netherlands, after planting of a so-called food forest, Migarda Raphaëla, Robin Bukenya and Roland van Reenen had this intriguing conversation with the Indian scientist and activist Vandana Shiva. It was an honor to share the richness of diversity both natural as human. If only we could decolonize our minds, diversity will feeds us in so many ways!