Animal products are vital components of the diets and livelihoods of people across sub-Saharan Africa. They are frequently traded in local, unregulated markets and this can pose significant health risks. This volume presents an accessible overview of these issues in the context of food safety, zoonoses and public health, while at the same time maintaining fair and equitable livelihoods for poorer people across the continent. 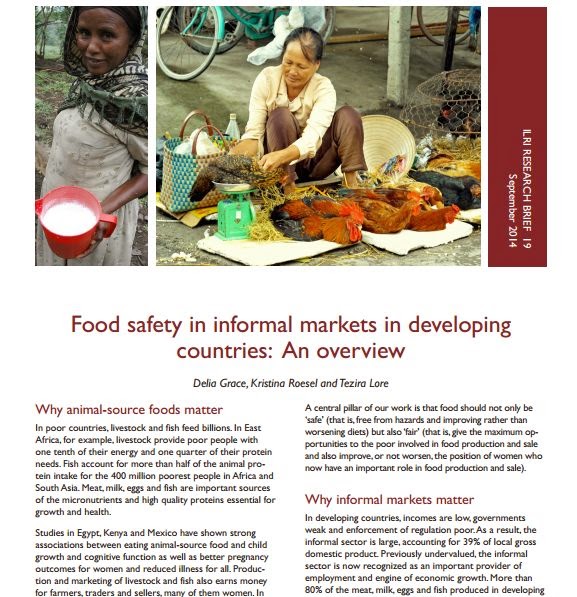 The book includes a review of the key issues and 25 case studies of the meat, milk, egg and fish food sectors drawn from a wide range of countries in East, West and Southern Africa, as part of the "Safe Food, Fair Food" project. It describes a realistic analysis of food safety risk by developing a methodology of ‘participatory food safety risk assessment’, involving small-scale producers and consumers in the process of data collection in a data-poor environment often found in developing countries. This approach aims to ensure market access for poor producers, while adopting a realistic and pragmatic strategy for reducing the risk of food-borne diseases for consumers. 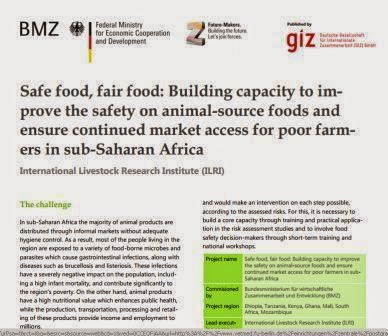 This compilation finds that informal markets provide essential sources of food and income for millions of poor, with milk and meat that is often safer than supermarkets.

Misguided efforts to control the alarming burden of food-related illnesses in low-income countries risk intensifying malnutrition and poverty — while doing little to improve food safety. Blunt crack-downs on informal milk and meat sellers that are a critical source of food and income for millions of people are not the solution.


Our work across eight countries found that we are right to be concerned about food safety in informal markets — from milk in Mali, to fish in Ghana, to chicken in Mozambique, to beef in Kenya — particularly for spreading gastrointestinal diseases that are a leading cause of sickness and death in developing countries, but it also shows that we are wrong to think that we can just adopt solutions developed in wealthy countries that favour large commercial operations over small producers. That will just exacerbate hunger and further limit money earning options for the poor. Delia Grace, program leader for food safety and zoonoses at ILRI.

The book probes the complicated world of traditional or ‘informal’ markets in livestock products. These are often called ‘wet’ markets because they use so much water in cleaning due to the perishable and often contaminated nature of the foods they sell. These venues sell most of the livestock and fish products consumed in Africa. And they are growing rapidly as rising populations and incomes drive greater demand for meat and milk.

While the food sold in informal markets is often safe, in Africa and elsewhere in the developing world, they are suspected of spreading dangerous pathogens ranging from Salmonella and E. coli to SARS, avian influenza and tuberculosis.
About A4NH
The CGIAR Research Program on Agriculture for Nutrition and Health (A4NH) helps realize the potential of agricultural development to deliver gender-equitable health and nutritional benefits to the poor. This program is led by the International Food Policy Research Institute (IFPRI). a4nh.cgiar.org
Related: