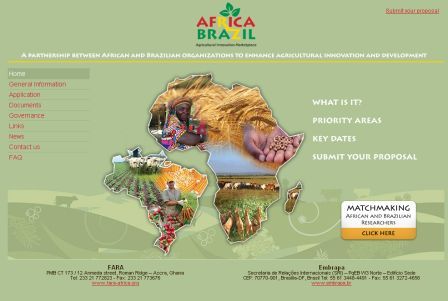 10-14 May 2010. Brasilia, Brazil. Launching of the Brazil/ Africa Marketplace Initiative and the Brazil/ Africa Dialogue on Food Security, Fight Against Hunger and Rural Development anchored by the Ministry of External Affairs in Brazil.

Following the logic that gave birth to PAEPARD, FARA initiated partnerships with EMBRAPA on what is termed Africa/Brazil Innovation Marketplace. Through this initiative, both parties in the agreement hope to organize a platform for researchers on both sides to come together with common topics which would be considered for funding using the Marketplace principles. Both DFID and the World Bank embraced the idea and agreed to provide seed money. Currently, IFAD and AFDB are considering their participation in this innovative South-South partnership approach.

The Africa/Brazil Dialogue involved African Ministers in charge of Agriculture, Water Resources, Rural Development and Fisheries. The Ministry saw the Innovation Marketplace Initiative as a tangible element that gives immediate meaning to a well publicized Dialogue and decided not only to put money into it but also agreed to have it launched with its own identity, but as part of the whole Dialogue process with Africa. 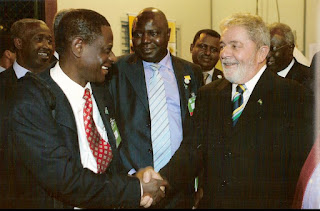 The Launching of the Marketplace Initiative was followed by the inauguration of the Center for Strategic Studies and Capacity Strengthening at EMBRAPA by the president of Brazil, Mr Luiz Inacio Lula da Silva. This structure is a $10m project which is targeted at providing critical services to developing countries in strategic discussions and capacity strengthening. Many African Ministers saw value in this Center and the first set of themes that were presented during the launching. Immediately after the launching of the Center, the participants were led through a display of technologies and innovations coming from EMBRAPA addressing various challenges along the value chain for several commodities.
FARA was represented by Dr Ramadjita Tabo, Deputy Executive Director, and Dr Adewale Adekunle, Director, Partnerships and Strategic Alliances
at Monday, June 07, 2010