8 June 2013. London, UK. The UK government, the Children’s Investment Fund Foundation (CIFF), Nutrition for Growth: Beating Hunger through Business and Science brought together business leaders, scientists, governments and civil society to make the political and financial commitments needed to prevent undernutrition, enabling people and nations to prosper.
and the Government of Brazil will co-host

The Nutrition for Growth event has ended with world leaders signing a global agreement to help beat hunger and malnutrition around the globe, saving the lives of at least 1.7 million children. 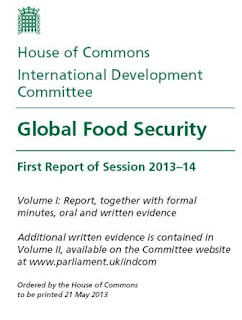 Their report outlines long-term factors affecting demand for and supply of food. It then considers how these factors, together with more short-term policy decisions such as export bans, have contributed to recent food price “shocks” or “spikes”, and how to reduce the magnitude of these shocks. They then consider how best to protect the most vulnerable when shocks occur.

The report is timely as the G8 presidency is currently held by the UK and they are focused on food security and nutrition. They are hosting the G8 summit on June 17-18 where food security is sure to be on the agenda and they will also be co-hosting an event with Brazil on June 8th called “Nutrition for Growth: Beating hunger through nutrition and science”.