27 January 2016. Brussels. Launch of the  Scientific Secretariat for the International Research Consortium (IRC) on Animal Health, which Horizon 2020 is funding for five years.

The IRC builds on the success of the EU-funded STAR-IDAZ Project (Global Strategic Alliances for the Coordination of Research on the Major Infectious Diseases of Animals and Zoonoses), an exciting initiative to coordinate animal health research globally. The IRC was launched on 27 January 2016 on the occasion of a large conference on agricultural research in Brussels. The Secretariat aims to deliver measurable advances in the control of animal diseases through the alignment of both public and privately funded animal health research around the world.

The Secretariat will be run by a partnership of organizations including

The IRC will focus on particular diseases such as foot and mouth disease and brucellosis, or aspects related to animal health and welfare such as antimicrobial resistance. The Scientific Secretariat, hosted at OIE Headquarters in Paris, will provide literature reviews and gap analyses to thematic working groups, and support the Scientific Committee and Executive Committee logistically. It will facilitate information exchange within the different partners of the consortium. The Secretariat will also play an important role in advocacy for the consortium and link with new members.

STAR-IDAZ IRC includes research funders and programme owners from Europe, Asia, Australasia, the Americas, Africa and the Middle East as well as international organisations and the representation of veterinary pharmaceutical and diagnostics companies. Together, they have committed a total budget in the region of EUR 2 billion to invest over a five-year period to 2021. Nineteen organisations from fourteen countries have signed so far (latest one being Bill and Melinda Gates Foundation) and the consortium is likely to enlarge in the coming weeks and months. These partners have agreed to coordinate their research programmes to address agreed research needs, share results and together seek for new and improved animal health strategies for at least 30 priority diseases, infections or issues. These include candidate vaccines, diagnostics, therapeutics and other animal health products, procedures and/or key scientific information and tools to support risk analysis and disease control.

The first meeting of the IRC Executive Committee and Scientific Committee was held at the International Livestock Research Institute, Nairobi, Kenya on 31 January – 1 February. 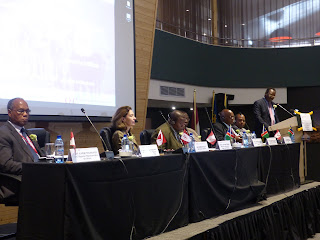 The OIE is the inter-governmental organisation responsible for improving animal health worldwide. It is recognised as a reference organisation by the World Trade Organisation (WTO) and in 2016 had 180 member countries, including Namibia.


Fifty-four representatives from member countries such as Zimbabwe, Togo, Cameroon and Uganda during the five-day conference discussed ways to improve animal health.

A specific methodology has been developed and published as the “OIE Tool for the Evaluation of Performance of Veterinary Services” (the OIE PVS Tool) and is key to this Project as it enables national Veterinary Services to establish their current level of performance, identify gaps and weaknesses in their compliance with the international standards of the OIE, and establish priorities. The Project is formed of two components.
at Friday, February 24, 2017