18 September 2019. Ann Waters-Bayer, a co-founder of Prolinnova and a longstanding and indefatigable member of the International Support Team, received a lifetime achievement award from the German Council for Tropical and Subtropical Agricultural Research. She received the award at a ceremony during the Tropentag 2019 held at the University of Kassel, Germany.

Brigitte Kaufmann, Director of Research at the German Institute for Tropical and Subtropical Agriculture (DITSL), University of Kassel, gave the laudation at the award ceremony as follows (extract):

ATSAF (ATSAF: Arbeitsgemeinschaft für Tropische und Subtropische Agrarforschung / German Council for Tropical and Subtropical Agricultural Research) has decided to honour Dr. Ann Waters-Bayer with its “Ehrenpreisfür das Lebenswerk”, which might literally be translated as “award for her lifetime achievement” - and it is my pleasure and a great honour to deliver the “Laudatio” on this occasion.

With this award, ATSAF seeks to appreciate and reward outstanding engagement in promoting young scientists and in networking and information sharing. I am very glad that ATSAF has chosen Ann as a laureate and I will share with you in the next few minutes why I consider her a particularly worthy choice. Already when I was a junior scientist myself - and had just finished my Masters degree in Hohenheim - I profited from her networking and information-sharing activities.

This was in the early 1990s, and Ann and her husband Wolfgang invited me for tea into their home in Göttingen so that I could use Ann’s collection of literature on participatory research. At that time, information on participatory research was still scarce and difficult to access, as most of it was grey literature – of which Ann had an impressive collection -  and she also had a photocopy machine. This means: She had the information and the device to facilitate its sharing - and – most importantly – she had the kindness to invite me as a student unknown to her into her home to profit from her experience. Since several years now, our paths are crossing and I have had the privilege to work together with Ann in a number of contexts.

Ann’s professional life follows two dominant and also somehow interwoven streams.
So already in the 1980s, Ann developed her interest in local innovation and joint experimentation with farmers. And it is her conviction that crop farmers and livestock keepers must have more autonomy and possibilities to influence – when research is actually meant to be “for development”. This conviction goes hand in hand with her emphasis on promoting agroecological agriculture and low external input farming, because particularly here there is a much stronger need to “contextualize” innovations.

Ann wrote, contributed to and edited books on agroecological farming, for instance the well-known and widely used “Farming for the Future” book. Published already 1992, it can be seen as a precursor to a topic that has just recently been pushed by FAO and the UN Committee on World Food Security.

When Ann worked for the Information Centre on Low External Input and Sustainable Agriculture – better known as ILEIA – from ‘89–95, she had indeed a “networking and information-sharing position” as she was writing and editing articles for the ILEIA Magazine. And she used this to actively engage with the different groups that figured in that magazine and that had experience in farmer-led research and agroecological farming. And she also used this engagement to help them to reflect and learn from their own experience and then share it in a way that again others could learn from it. 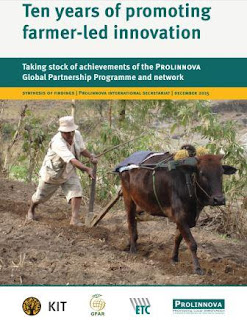 But Ann did not merely support cases of farmer-driven research - she took an active role in institutionalizing this different form of agricultural research. An outstanding achievement in this context is the creation and design of the Global Partnership Programme Prolinnova.

Prolinnova is an international learning network to promote local innovation in ecologically oriented agriculture. This network builds on active engagement of societal actors and this is also why the network still exists and develops despite the fact that the core funding from the Dutch government was terminated in 2011. Ann has always put an immense focus on networking.

And as we all know,this takes time and much more so before the common use of the Internet. Back then, keeping track of people and stimulating contacts and exchange was an arduous task, but Ann understood the importance of networking to make change happen. I know Ann as very much dedicated in helping students and young researchers from north and south to find their ways in making financing and research proposals work. She did this also in Agrecol, in her role as experienced senior advisor. Her humble personality gives often room for listeners to be very much surprised by Ann’s precise and innovative contributions and ability to provide holistic views and perspectives on situations.

Ann is now retired since 5 years. This is – as I understand – one of the necessary criteria to be eligible for the ATSAF award. However – her retirement has up to now been hardly noticeable, as she is still very active in networking and information sharing: She currently administers 3 mailing lists with together almost 1500 members. Ann’s lifetime achievement is a perfect example for how knowledge creation results from interactions. Her professional life was not directed towards making a career but she works on things that she finds stimulating and interesting and in which she wholeheartedly believes. This is most likely the reason why - despite her numerical age - she is still looking so young. Ann – may I ask you to come forward and receive your prize.
at Tuesday, October 01, 2019