Euromed Summit: Digitalisation and SMEs in the Mediterranean region

22-23 October 2019. Barcelona. The 2019 Summit of Euro-Mediterranean Summit of Economic and Social Councils and Similar Institutions (EESC), focused on the topic of the impact of digitalisation on SMEs in the Mediterranean area. The event brought together over 100 participants from a range of economic and social councils, or similar institutions, representatives of employers, trade unions, other economic and social interests groups and NGOs from UfM countries. 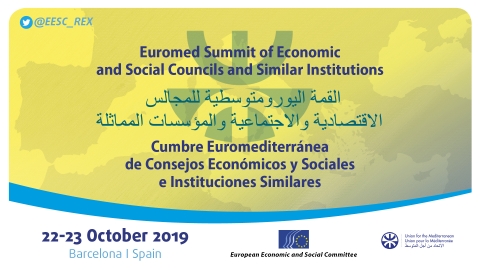 President, Luca Jahier, Acting President Economic and Social Council of Spain María del Carmen Barrera, and the President of Ascame, Ahmed M. El Wakil. Speakers highlighted the opportunities to innovate and grow for SMEs thanks to digitalisation, but underlined it also seriously affects the world of work and skill requirements for workers.

Throughout two days of workshops, the Summit stressed the need to integrate millions of young graduates into the job market each year, a major challenge for the countries of the Southern Mediterranean. Small and medium-sized companies (SMEs) play a decisive role in the fight against youth unemployment as they are important drivers of job creation and provide 80% of employment in the region. Indeed, training workers to fully benefit from the changes brought by digitalisation is key for economic and social development, both in the North and in the South of the Mediterranean. 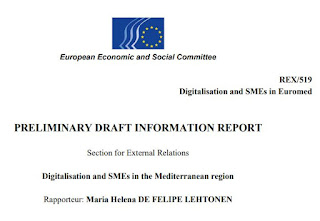 Extract of the progamme:

Session 1: Digitalisation and SMEs in the Mediterranean region, opportunities and challengesThis session was based on the draft report prepared by the EESC and sent to the delegations before the summit. It provided an opportunity to address issues in a wide discussion with the audience.
Workshop 3 Digitalisation to counter rural depopulation

Session 6: Networks in the Euro-Mediterranean area – developing regional cooperationThis session gave the floor to regional networks to present their activities and enhance their visibility.