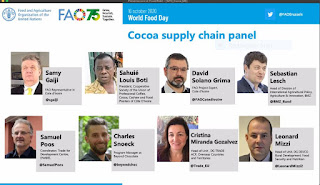 16 October 2020.  In celebration of World Food Day 2020, the FAO Liaison Office in Brussels hosted an online event. This year, World Food Day marks FAO’s 75th anniversary with the theme “Grow, Nourish, Sustain. Together. The actions are our future.” This fully virtual event is organized under the auspices of the European Parliamentary Alliance against Hunger and Malnutrition.
In the second part of the event, experts from the field, beneficiaries, industry and resource partners interactively tracing the paths of cocoa beans from tree to shelf while highlighting the sustainability and environmental challenges along the way.
See the overview of other events
FAO on social media
* Facebook - https://www.facebook.com/UNFAO
* Instagram - https://instagram.com/fao
* LinkedIn - https://www.linkedin.com/company/fao
* TikTok - https://www.tiktok.com/@fao
* Twitter - http://www.twitter.com/fao/
* Weibo - https://www.weibo.com/unfao
Related:

8/10 Chocolate groups gain ground on bean-to-bar tracing
In the cut-throat world of chocolate, big businesses have kept information on their supply chains close to their chests. But as scrutiny grows of the role of child labour and deforestation in what remains a largely informal industry, and policymakers step up regulation, they are finally making headway in mapping and disclosing their products’ origins.
Related: Madame Fanny is an inspiring woman who exemplifies Cocoa Life’s principles, including the belief that women are one of the cocoa industry’s most valuable resources.

In Côte d’Ivoire, Madame Fanny Assata Doumbia, who leads the ECAM farmers’ cooperative. ECAM supports farmers with continuing education on agriculture and financial management. Madame Fanny is an inspiring woman who exemplifies Cocoa Life’s principles, including the belief that women are one of the cocoa industry’s most valuable resources.

"There’s a campaign to sensitize men to the changing roles of women. ECAM has participated greatly in this effort. Men are being encouraged to include women in decision-making. In the very beginning, men were resistant. Today, not all men are open to the idea, but the majority understand that including women is the way to go." Madame Fanny Assata Doumbia

Beyond Chocolate is the Partnership for a sustainable Belgian chocolate industry. Partners in the initiative are working to end deforestation, stimulate education for future generations and provide a living income for cocoa growers. Signatories of the Beyond Chocolate partnership commit to:
By 2025: All chocolate produced and/or sold in Belgium shall comply with a relevant certification standard and/or shall be manufactured from cocoa-based products covered by a corporate sustainability scheme “Beyond Chocolate” partners shall comply with applicable agreements between governments and companies in the regions included in the Cocoa & Forests Initiative
Related: