Engaging the health and nutrition sectors in aflatoxin control in Africa 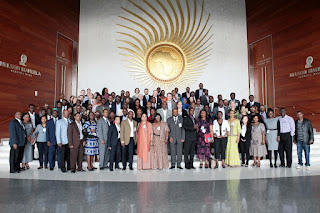 23 - 24 March 2016. Addis Ababa, Ethiopia. A two-day workshop under the theme “Mitigating the Health and Nutrition Impacts of Aflatoxins in Africa through Uncommon Partnerships” was held at the African Union Commission (AUC).

The workshop brought together stakeholders from the health and nutrition sectors; including representatives from member states, Partnership for Aflatoxin control in Africa (PACA), AMERF Health Africa, African union Commission (AUC) and, Global Alliance for Improved Nutrition (GAIN) also recognizing the need for engagement with other sectors affected by Aflatoxins in order to identify synergies. 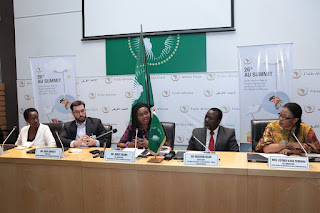 During the opening session Dr. Janet Edeme, Ag. Director of Rural Economy and Agriculture of the AUC emphasized that Aflatoxins pause a threat to food security health and natural trade as well as broad developmental efforts. She noted that the impact of Aflatoxins weigh heavily on human health and the evidence is widely spread on the continent as seen on the outbreak acute Aflatoxins recorded in Kenya and the chronic exposure data

She further added that the Aflatoxins are ravaging the continent and our women who are most vulnerable tend to be the most affected, as children are exposed while carried in the womb and the maternal diets. It also continues through their 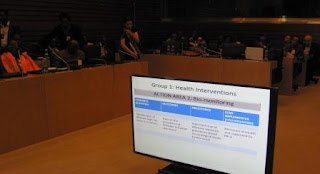 weaning diets which increases their chance of being malnourished and developing anemia or having impaired growth.

Dr. Amare Ayalew, Program Manager of Partnership for Aflatoxin control in Africa (PACA-AUC) stated that that Africa loses trade due to Aflatoxins which also undermine food security both in terms of the quantum of food rendered unfit and the low-grade contaminated food regularly consumed by millions of Africans. He underscored the bottom line to all these problems is the adverse health effects of Aflatoxins. 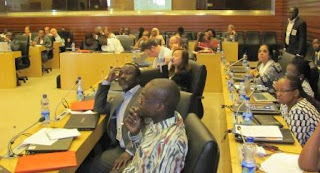 whole continent to mitigate the health impacts of Aflatoxins. Therefore, he urged to focus more on the solutions and actions that are necessary to jointly combat the problem.

Dr. Joachim Osur, Director for Regional programs and field officer of Amerf Health state in his remarks stated that as an organization they recognize that by eliminating Aflatoxin contamination they will not only be improving supply of plant foods such as maize and groundnuts but also safer animal foods leading to healthier and productive livestock. This will save governments huge amounts of funds currently being used to treat preventable illnesses. He stressed that tackling Aflatoxin is therefore not just a nutritional and health issue but a great development initiative that will help achieve a number of SDGs. 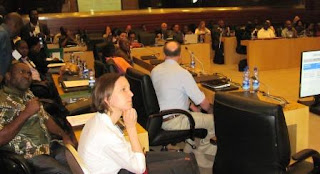 University gave a presentation on a World Health Organization report on mycotoxin control in low and middle income countries. He focused on child health and pleaded for action for the “benefit of our children”. He further discussed the IARC working group report which has been distributed to 30,000 people worldwide and is a basis for improved health in developing countries with a focus on human exposure to Aflatoxins and fumonisions.

During the press conference that was held on engaging the Health and Nutrition Sectors in Aflatoxin Control in Africa Dr. Edeme of the AUC highlighted that more than 5 billion people in developing countries are chronically exposed by Aflatoxins.

Dr. Joachim Osur, Director for Regional programs and field officer of Amerf Health Africa further added that the problem is at a community level and that partnering is done with communities to improve their health. He expressed that until the district health system is able to come up with an intervention that can be implemented, this will continue to be seen as a problem.

Mr. Greg Garrett, Director of Global Alliance for Improved Nutrition (GAIN) stated that 85 countries have mandated some kind of grain fortification and the central vitamins and minerals, and many of those are in Africa. However the bad news is some 25% of crops worldwide are infected with mycotoxin and what needs to be done is work with the PACA, the African Union and the government.

Ms. Martha Byanyima, lead expert of sanitary and Phytosanitary (SPS) Programme of Common Market for Eastern and Southern Africa (COMESA) reinstated that COMESA is elaborating on action plan where they can take solutions and actions to member states and coordinate collective actions to ensure safe nutritious supplies.

Extract from the programme
Findings of the report on Mycotoxin Control in Low- and Middle-Income Countries.
Prof. David Miller (Carleton University, Canada) Chair of the International Agency for Research on Cancer (IARC) Working Group

Video interview with Prof. David Miller (Carleton University, Canada) Chair of the International Agency for Research on Cancer (IARC) Working Group
Findings of the report on Mycotoxin Control in Low- and Middle-Income Countries.

Prof. David Miller gave in this interview following comments: It is essential