17-21 March 2018. African Continental Free Trade Area (AfCFTA). The Republic of Rwanda, which holds the African Union Presidency, hosted this 10th Extraordinary Session of the AU Assembly focused on the AfCFTA in the presence of the AU Heads of State, AU Commissioners, Representatives of the AU Organs, African Regional Economic Communities, UN Agencies and key partner organisations such as the EU.

The AfCFTA aims at providing a single continental market for goods and services, with free movement of people and investments. Its goal is to accelerate Intra-Africa trade through better harmonization and coordination of trade liberalization. Through these measures, the establishment of the AfCFTA is expected to gather impetus to boost economic growth and attract investments from both within Africa and the world.

Plan of Agenda 2063 and is being driven forward along with other related initiatives such as the Single African Air Transport Market and the Protocol on Free Movement of Persons and the African Passport.


"The adoption and signing of the AfCFTA legal instruments and the signing of the Protocol on free movement of persons are concrete commitments to liberalisation and to building on what has already been achieved at the regional level. The EU is ready to support the implementation of this impressive achievement in the spirit of the African Union-European Union partnership and our joint political declaration of the Summit in Abidjan in November 2017. Joint Statement HR/VP Federica Mogherini, EU Commissioner for Trade Cecilia Malmström and EU Commissioner for Development and International Cooperation Neven Mimica

In a recent article (26 March 2018) of the London School of Economics about the Economic Partnership Agreements, the author Dr. Olu Fasan argues in his analysis that


“EPAs could be the key in helping African countries achieve their goal of industrialisation”.

How so? By supporting Africa in the addressing what the United Nations Industrial Development Organization (UNIDO) calls “the 3Cs”, namely, competitiveness of supply capacity; conformity with international standards; and connectivity to markets. “If fully implemented, the EPAs can help Africa tackle, to a great extent, these challenges”, Dr Fasan argues.


One of the main challenges African countries face in gaining access to the EU market is the EU’s tough quality and packaging requirements. For instance, in 2016, the EU banned 26 Nigerian food products on health and safety grounds. However, under the EPA, the EU undertakes to provide financial and technical support to help West African exporters meet its Sanitary and Phytosanitary (SPS) standards, potentially removing a major non-tariff barrier.

Africa complains that the EPAs would lead to the continent being flooded with “cheap EU exports”, but China is flooding Africa with cheap exports without guaranteeing access to its market for Africa’s current and future manufactured exports. The EPAs give Africa a legally guaranteed access to EU markets.

If the EPAs fail, Europe would lose influence in Africa but Africa risks losing access to its traditional European markets, as well as the impetus and support to tackle its supply-side and trade constraints. So, Africa should ratify the EPAs, make use of their flexibilities, if necessary, and hold the EU’s feet to the fire on the implementation of the EPA’s development component. 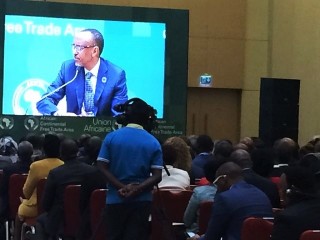 Plenary I - Leveraging the Power of Business to Drive Africa’s Integration.
Panelists:

Panelists:
*** The panelists address the question on the role of research, innovation and education @ 49:10
On the commercialisation of research findings and Africa to benefit more from its scholars abroad [the scientific diaspora]- an audience intervention from Egypt @ 1:02:20