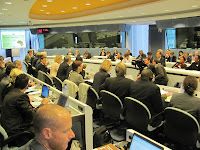 enterprises in Africa as a means of strengthening food security and creating wealth in rural communities across the continent.

Agri-food chains in Africa need to be upscaled, but in order to achieve this the right framework conditions need to be in place. In this context the workshop looked at the various components of agriculture food chains – from enhancing productivity at farm level, to upgrading value chains by empowering farmers' organisations and integrating them in strategic partnerships. It looked at how to respond to local, regional and international demand by adding value to commodities and at the roles of research, technology and innovation in the food chain, as well as access to finance, models of Public Private Partnerships, and the state of the (rural) infrastructure.

The workshop brought together stakeholders from Africa and Europe, representing Governments, the
private sector, civil society and academia and think tanks.


Resources:
Watch the video recording of the workshop

Go to the programme

Reuters 10/04/2013 EU urges investment drive in African farm sector
Related:
Hereunder is a video with Dr Ababacar Sadikh NDOYE, Directeur général Institut de Technologie Alimentaire - ITA, about the export of bisap in powder and packaged in 25 grams bags. The producers are represented by women groups, an NGO has given training on how to improve production and conservation techniques, the researchers come from the Institut de Technologie Alimentaire, and a private compagny Valdafrique and Sodobio have taken up the purchase of an industrial atonomiseur (to produce hibiscus in powder form).

He was inteviewed by PAEPARD during the second CAAST-Net Stakeholders' Conference on Africa-Europe S&T Cooperation, Dakar, 24-25/04/2012.


Transcript:
Bisap has become a national commodity in traditional festivities and ceremonies. The Senegalese authorities have recoginzed the importance of the bisap value chain in its policy of agricultural diversification. When did the multi stakeholderexperience started? It started in the nineties with research leading to a bisap concentrate. A local company realised it could make a beverage in tetrepack out of it. We developed a partnerhship in 2001 with the company which now sells the tetrapack in the warehouses. We also had a partnership with the University of Gembloux, the University of Dakar and my institute ITA. We developed drying technologies in 1996 and in particular the Diaspora found it bulky to transport bisap leaves. We started thus to research bisap in powder form. We have managed to develop a formula for a stable atomisation and  keeping its red color. We adopted this for other commodities and wanted to improve it. The evaluator of the Walloon (Belgian) funding recommended to create a pool of the 3 institutes involved in drying. The company "Developpement des biosense" was thus created in 2007 under the leadership of ITA. The private cie Oasis got interested and while our market was increasing we managed to sell to Japan, got the interest from Nestle and Sodobio. We could not remain at a pilot stadium when the entreprise ValAfrique asked for "atomisation"tests around acacia gum. In due course they have purchased an high quantity atomisation equipment. We concluded a partnership with them to extend the use of this equipment to other products like bisap. What we initially sold to Japan can no more be compared to the present product of Valafrique. Looking backwards there was no difference between a sack of seeds and our powder beverage!
at Monday, April 15, 2013