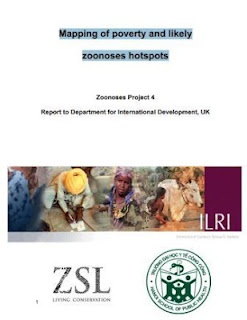 Among the study’s findings, the report reveals the heavy disease burden of zoonoses for one billion of the world’s poor livestock holders, in addition to surprising new data on emerging diseases in industrialized countries, many of which have never been mapped. Report on zoonoses shows the disproportionate affect of zoonotic diseases on the world’s one billion poorest livestock holders (Photo credit: International Livestock Research Institute).

The study identifies three classifications of high-priority zoonoses, the first of which, endemic zoonoses, causes the vast majority of illness and death in poor countries. Endemic zoonoses, such as brucellosis, are present in many places and are usually transmitted as food-borne illnesses. Given its widespread nature, the review suggests that endemic zoonoses are of greatest concern where the objective is reducing the burden of human illness and enhancing the profitability of livestock for poor small-scale livestock farmers in the developing world.

Other zoonotic diseases include epidemic zoonoses, such as anthrax and Rift Valley fever, which typically occur as outbreaks and are sporadic in temporal and geographical distribution. And the report examines emerging zoonoses, which are relatively rare and are characterized by rapidly increasing rates of incidence or expanding geographic ranges. Emerging zoonoses, such as bird flu and HIV-AIDS, can spread to cause global cataclysms. While zoonotic diseases can be transmitted to humans by any animal, most human infections are transmitted from the world’s 24 billion livestock.
at Tuesday, July 31, 2012