29 July - 4 August 2012. FAO Director-General José Graziano da Silva challenged academics to get involved in essential and politically important research into rural poverty and the food and agriculture business as it pertains to small-scale producers, in a speech in Lisbon to the World Congress of Rural Sociology.

"One of the great challenges we have today is to use academic knowledge to understand and improve the life of rural populations throughout the world," said Graziano da Silva. "To do so, we need to look at the reality outside of university walls."

After detailing what FAO sees as the most pressing issues in the fight against hunger and rural underdevelopment - from food insecurity, nutrient deficiencies and unsafe food to unequal competition between small-scale and large food producers - the FAO chief, a former academic and author himself, called for academics to play their part. 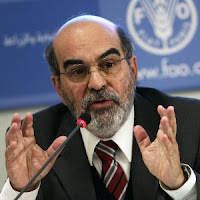 "All these issues need better conceptual clarification and practical proposals from academics and policy makers," he concluded. (source Academia Has Role in Fight Against Hunger, Says FAODirector-General
at Tuesday, July 31, 2012