Breaking the Mold: Impacts of Mycotoxins

20th May 201. Washington, DC United States. USAID. This month’s agrilinks seminar was an opportunity for agronomists, nutritionists, sociologists and field staff to share their background and experiences on the science behind mycotoxins and their health impacts and shifted towards integrating mycotoxin responses into agricultural development programming.

Agrilinks and the Agriculture Sector Council Seminar Series are products of the USAID Bureau for Food Security under the Feed the Future Knowledge-Driven Agricultural Development (KDAD) project. Watch the power point presentation (37 slides) 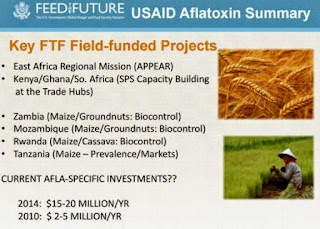 Nothing represents the interface between agriculture and nutrition as appropriately as the aflatoxin issue.

Elimination/mitigation of aflatoxin in the ag value chain will have a significant positive nutrition/health outcomes This is the perfect type of subject matter that FTF was conceptually designed to work on – a new breed of agriculture that is intimately tied to health outcomes. 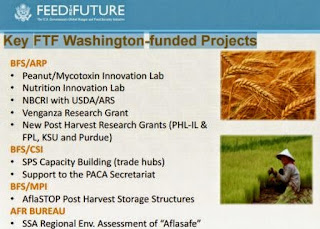 Aflatoxin free staple foods would be an agricultural result with a huge nutritional outcome - so why are the funding levels so low for such a pervasive problem? The Global Health Community is not convinced it is a priority equal to MCH, diarrheal and pulmonary diseases. It is not a primary killer but an an “accelerator” – requiring a more convincing “evidence base. 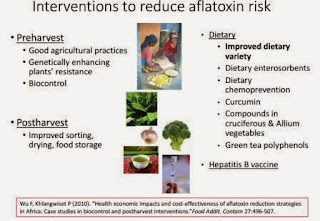 Overview of Feed the Future Investments in Aflatoxin Research and Development:

Johanna Lindahl (ILRI, Kenya) commented: We are not having any USAID funded project at the moment, but we are very interested in future projects aiming at looking at alternative uses of contaminated crops, especially the potential of using it as animal feeds, either with higher levels to less sensitive species, or in combination with binders or biological control measures. We have been discussing nixtamilisation in our group, but we have not found a way in adopting it to the African problem at a large scale. Nixtamalization can actually be reversed in the digestive system, thus reactivating the aflatoxin. This may be the case with many of the biological binders as well, such as Lactic acid bacteria, and I think this would be worth studying further.

Conclusion for discussion:
Fund much more work on the evidence base and less on ag best practice, (eg. breeding, storage structures, biological control) - As a result, more donor/ministerial funding that is “health sensitive” will roll in at a much higher levels of magnitude – which can ultimately be “re-applied” to ag best practice interventions. Thus the problem now may be poor “balance” in the limited funding pool – too little funding in ag/health linkage areas which have the potential to build the evidence base, possibly enabling higher levels of overall donor commitment in the future.
at Saturday, May 23, 2015