Report identifies gaps in research on agriculture for nutrition 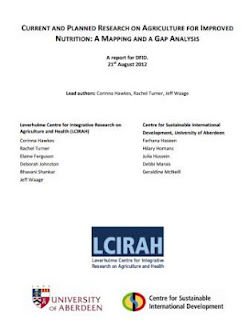 13 September 2012. Jan Piotrowski for SciDev. CURRENT AND PLANNED RESEARCH ON AGRICULTURE FOR IMPROVED NUTRITION: A MAPPING AND A GAP ANALYSIS.

Serious knowledge gaps exist in how agricultural developments lead to people's improved nutrition, which current research is not addressing, this report has found.

The report (DFID, 21 August, 47 pages) reveals eight gaps that are currently being neglected, including specific target groups — particularly rural workers and non-rural populations — as well as a lack of methodologies to guide research in the field.

Published by the UK's Department for International Development (DFID), the report — 'Current and Planned Research on Agriculture for Improved Nutrition: A Mapping and Gap Analysis' — first identified the direct agricultural factors, such as farming practices and the food value chain, as well as indirect, including health, economic and educationalstatus, that feed into nutritional outcomes.

It then analysed which of these factors 151 research projects on agriculture for nutrition — mainly based in low- to middle-income countries in Sub-Saharan Africa — addressed.
at Monday, September 17, 2012