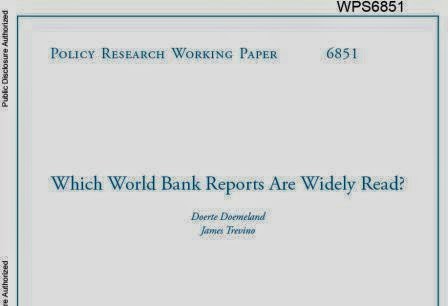 8 May 2014. Washington Post. What if someone had already figured out the answers to the world's most pressing policy problems, but those solutions were buried deep in a PDF, somewhere nobody will ever read them?

According to a recent report by the World Bank, that scenario is not so far-fetched. The bank is one of those high-minded organizations -- Washington is full of them -- that release hundreds, maybe thousands, of reports a year on policy issues big and small. Many of these reports are long and highly technical, and just about all of them get released to the world as a PDF report posted to the organization's Web site.

The World Bank recently decided to ask an important question: Is anyone actually reading these things? They dug into their Web site traffic data and came to the following conclusions: Nearly one-third of their PDF reports had never been downloaded, not even once. Another 40 percent of their reports had been downloaded fewer than 100 times. Only 13 percent had seen more than 250 downloads in their lifetimes. Since most World Bank reports have a stated objective of informing public debate or government policy, this seems like a pretty lousy track record.
at Tuesday, May 13, 2014