2 September 2014. Addis Abeba. A comprehensive report on the status of agriculture on the African continent was launched 2nd September on the side-line of the 2014 African Green Revolution Forum (AGRF)

H.E former President of Ghana John Kufuor while releasing the report reiterated that issues of climate change are not new to African farmers since they have been with us from the 1980s however he noted that the report is significant as it has given clear directions for the needed actors to combat it in good time.

He said, “The time to act is now. The world must address the root causes of climate change or its effects may become irreversible – and in fact we may already be past that particular tipping point. But we can still act to mitigate the severity of longer-term impacts – as governments, industries, financiers, civil society organizations, and simply as individuals – to decrease our carbon footprints and harmful greenhouse gas emissions, and to invest in promising solutions.”

As the second in the series of the African Agriculture Status Report, this volume seeks to provide an in-depth and comprehensive analysis of emerging issues and challenges faced by African smallholder farmers, and allow scholars and professionals to contribute practical and evidence-based solutions.

The Report documents the effects of climate change on smallholders in Africa, the ongoing adaptation by farmers and livestock keepers, constraints to adoption of climate-smart technologies, and highlights areas where investments in African agriculture have the potential to be most productive.

Fortunately, as this publication attests, there are many adaptation and mitigation options at our disposal. We need to be moving towards the widespread adoption of 'climate-smart' agricultural technologies and practices - not just in Africa, but globally. If we fail to do so, we risk greater food insecurity, higher food prices and rising poverty, as well as continued ecosystem degradation. 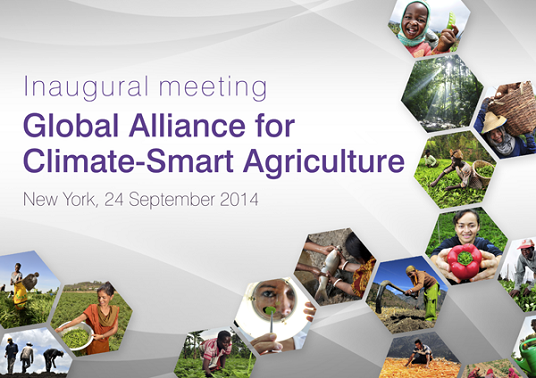 24 September 2014. New York. The Alliance will hold its inaugural meeting. The meeting brings together Alliance partners, to share information and guide its inception year.