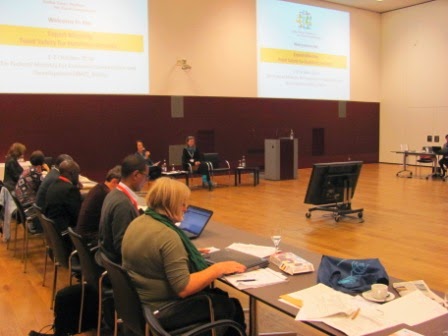 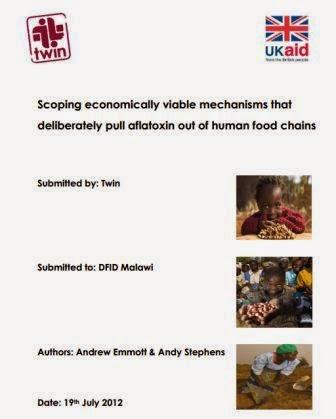 Groundnut oil has been identified by Malawi’s National Export Strategy as a key regional export and import-substitution product in the country’s effort to diversify from tobacco dependency. Once contaminated nuts have been pressed into oil, a simple filtration process that removes protein can significantly reduce aflatoxins to safe levels. This results in both a nutritious product and access to value-added markets for crops.

The waste product of pressing groundnuts for oil, known as press cake, can be treated with clay for safe use in animal feed. The contaminated press cake is added to normal feed and mixed with clay, which binds with the toxin while the food is digested by livestock. Clay feed additives are already used extensively in the United States and the EU as anti-caking agents to improve the physical properties of feed.

FARMD (November 2013) | This interview with Andrew Emmott, Senior Nut Specialist for Twin & Twin Trading, discusses aflatoxin risk management generally and what risks are posed by aflatoxin contamination. The work of Twin in this area is specifically highlighted and more specifically the ways in which Twin helps smallholders better manage their aflatoxin risk by understanding aflatoxin contamination as a barrier to trade and as a human health risk. The USER GUIDE provides step by step guidance on how to use the Mycotoxin Sampling Tool in 26 mycotoxin-commodity combinations.

Related (5): Other PAEPARD Blogposts about aflatoxin

· Intensive training on mycotoxin analysis 2014
Sep 04, 2014. This training session aims teaching the trainees the fundamentals of the most important analytical methodologies (ELISA, HPLC, LC-MS/MS,…) for mycotoxin analysis in food and feed.
· Safe food saves life: Dealing with aflatoxin
Aug 09, 2014. ILRI is determining the risks posed to such different groups of people by exposure to aflatoxin-contaminated milk in a 'My-Dairy' project in Kenya funded by Finland's Ministry of Foreign Affairs.
· PAEPARD: Climate change and mycotoxin prevalence
Jun 02, 2014. It is assumed that the highest mycotoxin risks will be observed not only in countries with tropical climates but also in countries with temperate climates, such as parts of Europe and the United States of America.
· Comprehension and action required for successful aflatoxin
Apr 11, 2014. Quite a lot of research has been conducted on aflatoxins but FoodAfrica is the first project that is focusing on putting economic figures on the effects of aflatoxin on livestock and potential health risks.
· East African Community workshop on Aflatoxin
Mar 15, 2014 A two-day regional workshop on Aflatoxin Control Program was organized by the EAC Secretariat with the support of (USAID) and International Institute of Tropical Agriculture (IITA) .
· Malawi Programme for Aflatoxin Control (MAPAC)
Nov 19, 2013. The Malawi Programme for Aflatoxin Control (MAPAC) (September 2013, 54 pages) , developed in this document, represents an initial effort to create a shared vision, prioritize entry points and create mechanisms for effective coordination.
· Smartphone App Offers Cheap Aflatoxin Test
Nov 09, 2013. Data from the tests will also be automatically uploaded online to create real-time, open-access maps of aflatoxin outbreaks for research.
· Aflatoxins: Finding Solutions for Improved Food
Nov 06, 2013. The nineteen briefs in this set thus provide different perspectives on aflatoxin risks and solutions.
· Is a common food fungus worsening the AIDS ...
Aug 01, 2013. “Our work suggests study that aflatoxin exposure may be taking an even greater toll in areas where millions are infected with HIV, including Africa and Asia, the latter with a fast-growing HIV population
· Aflatoxin control project receives approval
Jul 06, 2012. The Control of Aflatoxin Conta-mination in Maize and Peanuts project has received approval from the Kenya Standing Technical Committee on Import and Export (KSTCIE) to do on-farm testing of aflasafeKE01.
· G20 Mexico 2012 launched an innovative Fund
Jun 23, 2012. Encouraging innovative distribution of a breakthrough technology to reduce aflatoxin contamination. The aflatoxin control pilot will provide incentives for smallholder farmer adoption of a particularly promising aflatoxin control
· Biocontrol product developed by IITA reduces aflatoxin
Mar 28, 2013. 26 February 2013. Feeding poultry with maize treated with a biocontrol product for controlling aflatoxins - aflasafe™
· IITA partners launch initiatives to tackle killer aflatoxin
Jun 26, 2011. A new strategy in combating the aflatoxin-causing fungus Aspergillus flavus was recently launched in Nigeria. The project funded by Bill & Melinda Gates Foundation aims to develop a biocontrol technology.
· Mycotoxin reduction – Global solutions
Apr 07, 2011. The MycoRed Africa 2011 Conference brought together a range of international experts to discuss mycotoxicological issues in general and mycotoxin reduction measures in particular.

Farmers in southern Malawi have come up with their own clever ways to harvest, dry, grade and store their chillies. To remove the pain in their hands after harvesting the chillies, they use various techniques. The biggest enemy of stored chillies is moisture, as this may result in your chillies getting mouldy and developing a poisonous product, called aflatoxin. Therefore avoid keeping your chillies in a polythene sack as moisture can build up in the sack.