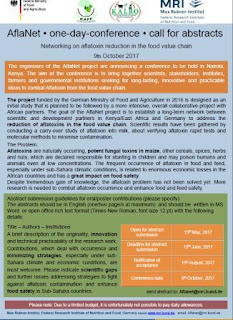 18 April 2017. In the inter-departmental project “Aflanet”, MRI scientists are building a German-
Kenyan network of scientists, public and private organizations, as well as farmers to reduce aflatoxin in the food chain.

The organizers of the AflaNet project are announcing a conference to be held in Nairobi, Kenya. The aim of the conference is to bring together scientists, stakeholders, institutes, farmers and governmental institutions seeking for long-lasting, innovative and practicable ideas to combat Aflatoxin from the food value chain.

The project funded by the German Ministry of Food and Agriculture in 2016 is designed as an initial study that is planned to be followed by a more intensive, overall collaborative project with African partners. The goal of the AflaNet project is to establish a long-term network between scientific and development partners in Kenya/East Africa and Germany to address the reduction of aflatoxins in the food value chain. Scientific results have been gathered by conducting a carry-over study of aflatoxin into milk, about verifying aflatoxin rapid tests and molecular methods to minimise contamination.