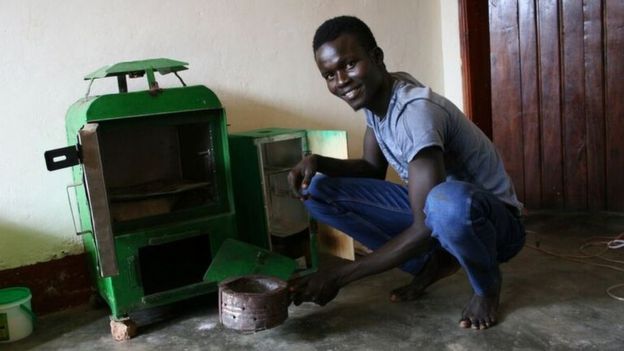 In Uganda, engineering graduate Lawrence Okettayot is addressing food waste with his new Sparky Dryer, which is a food dehydrator that runs on biofuel from a farmer’s garden and burns with zero-carbon emissions. The dehydrator helps farmers avoid food loss and food waste due to spoilage, which is an issue in Uganda for many farmers. The dryers start at about $80 and can dehydrate 10kg of mango in two hours running on 2kg of biofuel.

“Because in Uganda 80% of the population don’t have access to electricity, they can put anything from their garden, like leaves, sticks, anything that is not of use at the minute, and the catalytic converter converts the toxins into good gases so the gasification process has zero carbon-dioxide emissions,”  Lawrence Okettayot

The device is a dehydrator running on garden waste that dries fruit and vegetables quickly, making them last for months instead of days. It looks like a small fridge and uses organic waste instead of electricity - to which few farmers in Uganda and elsewhere in Africa have regular access.

The alternatives to the Sparky Dryer are electric-powered dehydrators but they are too expensive, while traditional drying methods - solar dryers or open sun drying - do not work well during the rainy season and are much slower.

Yet despite its potential, Lawrence has sold very few units - seven in all. So does his invention actually work?

"We only have two processing facilities in Uganda. The government doesn't do business and private investors just aren't aware of the huge market potential here. Uganda plans to create food processing hubs for specific products in different regions, but progress is too slow."  James Tumwine from the Ministry of Agriculture.