26 July 2016. Cotonou.
The AAIN Newsletter July-August 2016 edition features on Page 5 the PAEPARD project ProSAM and the visit to the Minister of Agriculture of Benin.

Mr Patrice SEWADE, Coordinator of SOJAGNON -NGO; Mr Gbèlidji VODOUHE and Mr Martin AGBOTON respectively program officer and Research Assistant at SOJAGNON-NGO were received in audience by Dr. Delphin KOUDANDE, Minister of Agriculture, Animal husbandry and Fishery assisted by Mr Mignannou FANDY. . During the audience ProSAM project funded by FARA through PAEPARD project sponsored by the EC and the ProSeSS project funded by the NWO/Arf of the Kingdom of the Netherlands; and the agribusiness project under AAIN were presented.

The purpose of the meeting was to present SOJAGNON-NGO, ProSAM-Benin and its national 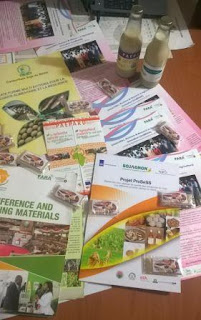 partners, PAEPARD/FARA and its Partners to the Minister. The Competitive Research Fund (CRF) is project implemented by a consortium of Beninese institutions in partnership with European partners (Wageningen University and University of Lisbon).

At this occasion, the results/innovations achieved so far by ProSAM/CRF, the involvement of the private company Benin Agribusiness Incubation Hub (BAIH-Sarl) were presented. BAIH-Sarl aims at turning research results into business for job creation for young people and especially soybeans processors. The importance of soybean derived products in food and nutritional security and the strategy of dissemination of the results on a large scale have been addressed.

Posters and leaflets about stabilized milk, taste enhancers made with soybean "afitin" were presented and shared with the Minister and his Assistant. Constraints in soybean seed systems and the wish of the consortium to make the Ministry of Agriculture the flag bearer of the strategic plan for the development of soybean seeds sector were also raised with the Minister.