Read the Call for Concept Notes document for full details, including:

Background
The principle objective of the CultiAF Fund is to improve food security in 10 countries in east and southern Africa by funding applied research in agricultural development. An expected outcome is an increase in high-quality scientific research with a focus on the adoption of existing and new research results to tackle persistent problems of food insecurity.


The CultiAF Fund aims to address under–researched and under-utilized agricultural activities and research that exhibits high potential for being scaled up in use. By “scale up in use” it is intended that research will identify adoption pathways and actively involve the research end users who are necessary to take research findings to scale. Given the crowded agenda in some areas of agricultural research in Africa, the CultiAF Fund will seek to support complementary exploration and study where there is a solid research base, good absorptive capacity by national and regional African agricultural research systems, a favourable policy environment, and expressed need.

The CultiAF Fund will be managed in Nairobi by a new team established in IDRC.

Related:
The Australia Africa Universities Network (AAUN) hosted the International Africa Forum, The Power of Partnerships and the AAUN Annual Meeting, on the 8-9 July 2013 at the University of Sydney, Australia. This event has been developed with the Association of Commonwealth Universities, who are celebrating their centenary year in 2013-14. The Forum will bring together Australian and African researchers, policy-makers, officials and other interested parties to discuss areas of mutual interest and agree on an action plan. 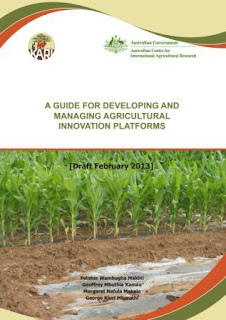 The ACIAR-sponsored Innovation Platforms (IP) workshop was convened by Kenya Agricultural Research Institute (KARI) to share experiences for people working in the agricultural sector in Africa with the by-line Innovation platforms for enhancing innovation and learning.

Coming out of this workshop was a process where a guide (Draft, February 2013, 58 pages) was prepared by a select group and this guide was distributed to all participants and relevant stakeholders.