25th to 26th, October, 2012, Arusha, Tanzania. CAAST-Net cooperation with the RECs began with an exploratory meeting in February 2010 in Gaborone with SADC officials and the development of a roadmap of collaborative activities for high-level endorsement is in progress. As a result of this engagement, a workshop on renewable and solar energy was held in Malawi from 20th to 22th of September, 2011. Similar dialogues have been initiated with the EAC and ECOWAS and one is anticipated with ECCAS.

In that respect, a consultative process was initiated with the EAC Secretariat in September 2010. It resulted in a focus on priorities addressed by the EAC Action Plan on Food Security. This was followed by an experts´ meeting in Dar-es Salaam in May 2012 in which the EAC priority topic of ‘Improved technologies for increasing production in crop, livestock, and fisheries’ was agreed.

One of the key note presentations came from PAEPARD about: Is funding of ARD adapted to the needs? You can download the presentation here. 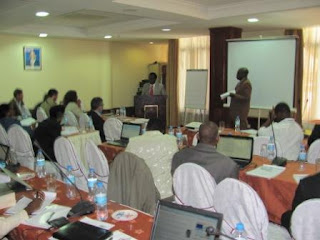 Background:
CAAST-Net is a network of national authorities from Sub-Saharan Africa and Europe sharing a common objective of advancing scientific and technological cooperation in research, development and innovation (RDI) between both regions for the common good. It is funded by the European Union’s framework programme for research and technology development (FP7). The CAAST-Net consortium consists of 13 African and 10 European partners.
at Thursday, October 25, 2012