The Climate Chance Africa 2021 Summit aimed to bring together the largest community of non-state actors in Africa: local authorities, businesses, NGOs, trade unions, youth organisations, indigenous peoples, women’s organisations, scientists, and representatives of the agricultural community. These are the nine major groups recognised by the UNFCCC that are committed to the fight against climate change and their networks, in relation with national authorities.
See the programme
#SCCA

This 3rd edition was held virtually, as the current health context unfortunately does not allow for an event in Africa. 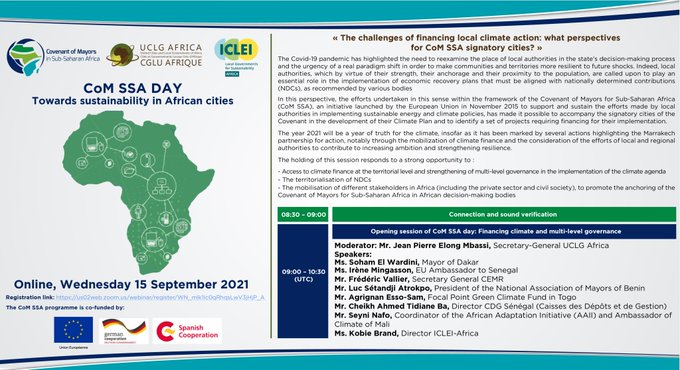 15/09 - Demystifying SEACAPs: hear from experts and African cities on their experiences

The Covenant of Mayors in Sub-Saharan Africa organised a CoM SSA Day.  A technical session was held on demystifying Sustainable Energy Access and Climate Action Plans (SEACAPs) for cities.
CoM SSA’s 250+ mayors and partners shared their knowledge and success stories, focusing on overcoming the challenges that local governments face together with business sectors, financers, NGOs and research institutions.

16/09 - High-Level Plenary: “From Glasgow 2021 to Dakar 2022: Priorities for Climate Action and Sustainable Mobility in Africa” with CODATU and CETUD.

This High-level online Plenary in the run up to COP26 in Glasgow, launched a working year for the preparation of the SMDC (Week for Sustainable Mobility and Climate), in September 2022 in Dakar and identified key priorities for climate action and sustainable mobility in Africa.
➡️ Roundtable #1 Mobility: “How can we make mobility part of a sustainable system and contribute to a better environment and climate?”
➡️ Roundtable #2 Local Action. Thread: “How can effective decentralisation and vertical integration accelerate the implementation of climate and local development policies and actions?
➡️ Roundtable #3 Access to finance. “What needs for increased mobilisation of climate finance for development and climate action at the local level?

16/09 - Access to Climate Finance and the Green Climate Fund. The objective of this session was to illustrate with the AgriFED programme (Projet d’Appui aux Femmes dans l’Agriculture et le Développement Durable -PAF/AgriFeD) how and at what levels women have a decisive role in climate action, to highlight the impact of this type of programme and to identify potential perspectives for replication of the programme.

This urban campus reported on the knowledge derived from the experiences of metropolises in Africa and to identify specific issues based on existing differences such as the different responses to climate change, adaptation to technological and environmental transition, resilience in complex organizational systems, etc.

The objective of this workshop was to mobilize the whole Education coalition around a climate change education project in partnership with the NGO Aide et Action.

17/09 - Workshop: Adaptation and Water, on the Road to the World Water Forum.

17/09 - The Great Green Wall and Biodiversity Corridors in Africa

In the presence of French and Senegalese speakers who are strongly committed to the success of the Great Green Wall, this workshop was an opportunity to discuss concrete projects or achievements linked to the initiative (eco-villages, biodiversity corridors, etc.)

This workshop dedicated to energy access and efficiency in Africa brought together the sector’s actors and build strong, priority messages to take on behalf of the Coalition to the next major international climate events.

This session set the pace and the priorities for the events to come in the following months, for the entire community of non-state actors engaged in Climate Action, with the overarching aim of furthering climate change mitigation and adaptation on the African continent.
Upcoming event:
26-29 September 2021. Africa Climate Week 2021
ACW 2021 is accelerating collaboration and integrating climate action into global pandemic recovery. Building forward opens an opportunity to address social inequalities and invest in economic development that is good for humanity and nature.
at Thursday, September 16, 2021