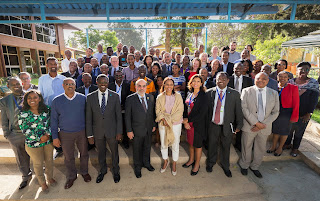 27 January 2018. African Heads of State gathered in Addis Ababa, Ethiopia for the 30th African Union Summit to discuss issues vital to the continent’s progress and prospect.

A high-level meeting was organised in the margins of the Summit on “Achieving Zero Hunger in Africa by 2025” which aimed to review and renew the 2013 partnership between the AU, FAO and the Instituto Lula to end hunger and malnutrition.


There is a need for a deepening and broadening of hunger-fighting initiatives in Africa in order to put the continent back on track to eliminate the scourge of undernutrition. Achieving zero hunger in our lifetime is still possible, although it will require a redoubling of current efforts and a push for political commitment and timely concrete actions such as never seen before. Investment in agriculture development is “the single most effective way to provide opportunities for families to generate income and improve nutrition in Africa,” Graziano da Silva, FAO Director General

The high-level meeting was co-organised by the African Union (AU) Commission and Ethiopia’s Ministry of Agriculture with support from FAO and the UN Economic Commission for Africa (ECA).

Participants at the high-level event included: