The Syrian Seed Bank that Keeps Operating through the War

The Syrian Seed Bank that Keeps Operating through the WarWhen fighting in Syria drew close to Aleppo, agronomists at the International Centre for Agricultural Research in Dry Areas (ICARDA) launched a daring operation to save their seed collection. They managed to evacuate almost all of their seed bank to the Global Seed Vault in Svalbard. 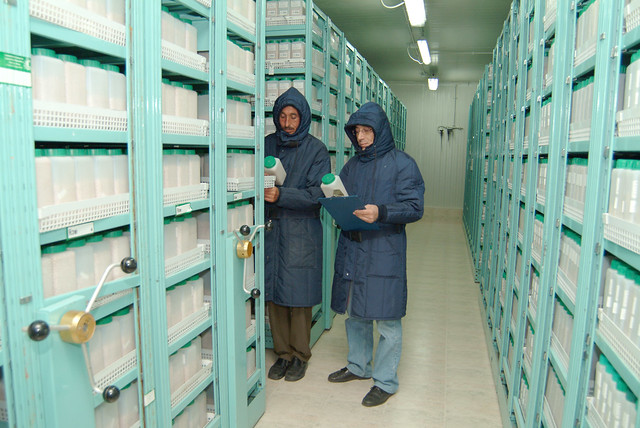 For more than four years, the headquarters of the International Center for Agricultural Research in the Dry Areas (ICARDA) in the Syrian town of Tal Hadya has been occupied by the anti-Assad groups Al-Nusra and Ahrar al-Sham. ICARDA is one of 15 major international agricultural research centers, and the site of a seed bank housing some 150,000 samples in temperature-controlled vaults.

Periodic bulletins have assured the public that ‘the seeds are safe’ in the midst of conflict, duplicated at seed banks outside the country. The Syrian war precipitated the first ever withdrawal from the subterranean seed vault at Svalbard in the North Pole last year when ICARDA staff requested previously deposited material to populate new seed bank facilities in Lebanon and Morocco.

Yet remarkably, while ancient archaeological sites are destroyed and Syrian people experience inconceivable loss, the seed bank in Tal Hadya continues to operate. Its refrigerated vaults remain powered, and a small number of Syrian staff are permitted by occupying rebels to maintain the facility. Why?

The answer illuminates what it takes to wage war in the twenty-first century. Even before conflict around Aleppo hastened the departure of foreign staff, the backup generators kicked in as the heat of the summer caused regular power outages throughout the region. With its specimens carefully preserved at -20 degrees Celsius (4 degrees Fahrenheit), ICARDA’s seed bank cannot sustain any failures. The facility’s diesel-fuelled backup generators insulate it from the blackouts experienced elsewhere.

And these power outages are key to the seed bank’s survival. ICARDA is a state-of-the-art facility; but its utility to factions in the war is in large part as a power source. Occupying fighters use ICARDA to charge laptops and mobile phones, and some profit from the black market in fuel needed to power the generators.

But this isn’t enough of an explanation for the seed bank’s continued operation in wartime. While ICARDA ordered expat staff out of Syria, many native managers and technicians remained. They continued their work, negotiating daily passage to the facility to retrieve important data and check the operations of the seed bank. Meanwhile, the herbarium — a valuable collection consisting of 16,000 dried and pressed wild cereal and legume specimens from the Fertile Crescent region in Syria, Lebanon, Jordan, Turkey, and Iran — was packed into dozens of metal filing cabinets and trucked to a safe house in Aleppo’s city centre. The survival of this unique collection remains uncertain.